As the Riley Family prepares to gather for Christmas in Greensboro, my sister-in-law, Maggie, the co-host with my bro, Page, sent out an email to all about sleeping arrangements, cooking assignments, etc. She laced references to song titles from family favorite, John Hiatt, throughout her email. That started what became a long chain of emails between our family members adding more and more references back and forth.

I started to join the fray and remembered this posting from 2008 on my old blog site. I am sharing it once again with the family and whomever wants to read it along with a few links to live performances. If you too have a John Hiatt story or favorite song or album or concert, leave a comment below and share with all.

(July 2008) I’m ripe with new music from Clark’s Father’s Day gift and Julie’s anniversary surprise and I’ve been listening pretty intently, either while riding to work during my Atlanta summer commute or while writing.

Here’s the first of five new selections that I’m throwing out there for those of you who share an interest in music, new and old, from bands in their infancy to singer/songwriters in their second life. 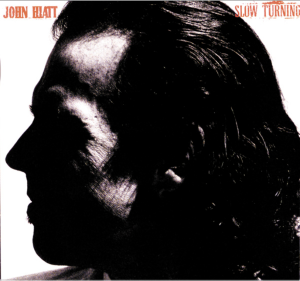 John has become one of the musical loves of my life. One of my interns at WPXI back in the early 90’s gave me “Slow Turning” as a parting thank you gift. At that time I used to play music in my conference room on Fridays for those in earshot so she had a sense of my musical taste. “I think you’ll like this guy.” As often happens in the land of opportunity, we let great things languish. I took it home, set it aside for a while until one day, seeing the CD and remembering the gesture and intrigued by the cover photograph of this craggy faced, oil-slick hair musician, I popped it in the player – the first digital player of our lifetime. Out of my old Advent speakers came this incredible sound that picked me up and took me places in rhythm and rhyme and story telling phrases that licked the essence of life experiences. As they say, I was transported.

(Click here to experience “Drive South” the title track and first cut on the first Hiatt I ever heard. You’ll see what drew me to him.)

Later, at lunch with a local Pittsburgh radio executive, I dropped Hiatt’s name. His eyes lit up. He had found someone else who knew the guilty pleasure of John. “Do you have, “Bring the Family”? Nope. “Slow Turning” is all we have at the moment. “I’ll make you a cassette.” He did. We played it on a trip down to Beech Mountain. I fell in love with “Memphis in the Meantime” and spent the majority of our visit in the mountains figuring it out on the guitar.

I won’t take you through the many concerts of his we’ve seen but I must say that the first two set the stage for a love affair lasting through today and his new release.

The first thing that hits you is the difference in his album photograph personae and his stage presence. In the photos he’s cool, edgy and thoughtful. On stage, I’ve never watched someone enjoy himself or herself any more than Hiatt. He wears 50’s style clothing, laughs and jokes his way through the sets and cracks himself up all through the night. He tells stories in between his songs in a self-deprecating fashion.

Our first opportunity to see him live was at Graffiti in Pittsburgh in a standing room only crowded house. Later, we talked him up enough to convince a couple of friends to go see him at Metropol, a new hip hot spot in the historic Strip District. It was this concert tour playing most of the just released “Walk On” album that took us to an incredible pinnacle of personalized hand-crafted musical experience. “Cry Love” live finished in this brimming over the top cascading of perfect harmonies of acoustic instruments and human voices singing the “Cry love” refrain until we, well, almost cried tears of joy. After the final crescendo, the four of us – again standing in the pressed together flesh of shoulders four rows from the musicians craning to see it all from the open floor – looked at each other with “Damn that was unforgettably good!”

Often we’ve traded his name and CDs with others who enjoy looking for new entrees into their musical revelations. My little brother, Page, took to him and turned some friends in Knoxville on to his music. Clark and Blair grew up with the tunes and traveled with us to many a concert here in Atlanta, a frequent stop on his touring path, only four hours from his Nashville area home.

Back in 1997 I was in a Nashville recording studio on Music Row working on new theme music for WPXI. During a break in the session I turned around and looked at these boxes housing two-inch wide recording tape reels for the 16 track decks in use at the time. On the rib of one it said, “John Hiatt”. My heart skipped a beat. I was feet away from a master of tracks of the guy I idolized and whose music made me come alive. I said to the session engineer that I didn’t know what the protocol was, I assumed these were private tapes, but was there anyway possible that he could string it up and let me listen? He just shook his head and said, “No way man.” Still, I was that close to maybe “Little Head.”

So buy it and any other in Hiatt’s discography, and if you see that he’s performing in your area, please go to see him. He may be alone or with some amalgamation of his almost lifelong band of brothers, The Guilty Dogs or The Goners. You’ll love his love of music and the little things that can make music. You’ll also enjoy his sense of humor in his songs. Here’s the track that started it all for me, Memphis in the Meantime.

(Thank the world for YouTube! You can see and hear almost any song video recorded “live” and see John’s joy in performing with kick ass band mates.)

Remember, leave a comment in the box below and let’s keep the Hiatt chat going!